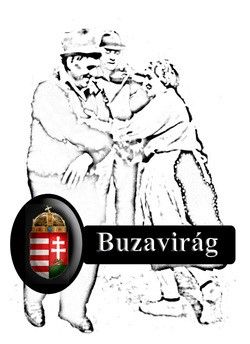 We perform locally and provincially

We are part of the local Hungarian Community

The Victoria Búzávirag Dance Group was formed in 1966, to commemorate the 10th anniversary of the 1956 Hungarian revolution. We were originally a part of the Victoria Canadian Hungarian Society, but became our own “stand alone” group in 1986. The aim of this dance group is to perpetuate the Hungarian culture through dance, song and music.

The group has been privileged to be part of the Western Canadian Hungarian Folk Festival since it began in 1979 and has hosted that annual event in 1983, 1992,  2000 and 2008. That event brings Hungarian dancers and musicians from the 4 western provinces, as well as guest instructors, musicians and performers from other parts of the world, to the host city to teach, learn and present public performances.

Our group has performed extensively throughout western Canada and the United States, as well as 3 tours of Hungary/Slovakia in 1985, 1996 and 2003. We had been a part of Victoria Folkfest for over 25 years and enjoyed every minute of it. Some of the other events that we have been privileged to perform at are: Victoria Performing Arts Festival, where we have won honours many times; Seattle Folklife; and Edmonton’s Heritage Days.

Some members of the group are presently studying traditional folk music from Hungary and hope to be able to accompany ourselves with live music in a few years. We are instructed by Iggy and Louise Kadar, both with over 35 years dance experience and instruction. Members of the group have been requested to teach in other western Canadian and United States cities, as well as create choreographies for other groups. We have been fortunate to be able to bring instructors and musicians out from Hungary to teach us new dance styles and keep our link with Hungary alive.

Sign up to hear from us about specials, sales, and events.

Better yet, see us in person!